It’s Thanksgiving! Family and friends are about to descend for a dinner you have spent days, if not weeks, preparing for. Right about now then, is when it hits you like a quick punch to the gut: those guests are staying for three nights, and you haven’t planned any other meals.

Wednesday night you’ll order pizza, and a bag of bagels covers breakfast. There are turkey sandwiches for lunch on Friday, but what are you going to do that night for dinner?

Let’s face it, you’re exhausted. After getting a 23 pound turkey on the table with stuffing, mashed potatoes and 8 other side dishes – all ready at the same time, you might add – there is no way you are returning to the kitchen to cook another full diner for 10-15 people.

So, make a pot of soup! It actually does get better after a day or two, so you throw it together on Tuesday. With cold weather forecast all week, you can leave it out on the porch, saving plenty of room in the fridge for Thanksgiving dinner groceries. Best of all, it’s Moroccan, which will be a welcome break from the hearty American fare you’ll be eating until Thanksgiving leftovers finally run out.

Now sit back and enjoy a glass of wine. You’ve got a busy week ahead of you.

*If you are also celebrating Hanukkah this week, leave out the pork and increase your lamb and beef to 3/4 lb. each. 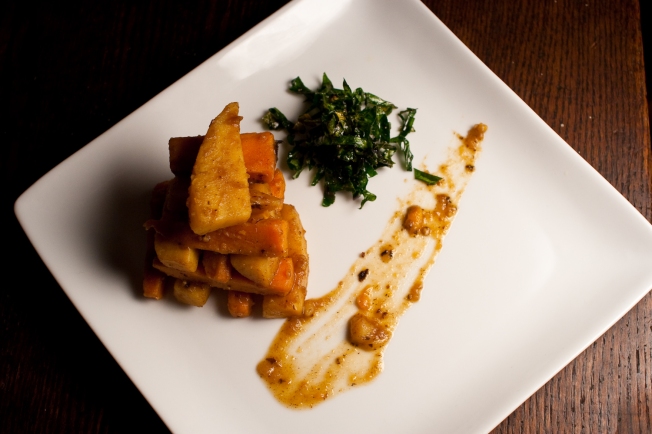 Moving to DC 10 years ago, the Southern traditions of greens and sweet potatoes were exotic and foreign. In New England, the only thing we boil for several hours is brisket, and we don’t add molasses or marshmallows unless we’re serving dessert. This past week, in the heated run-up to Election Day, I was determined to find common ground.

Maple sugar brings sweetness and depth to the potatoes while a complex Autumn Apple vinegar delivers balance and brightness. Nutmeg and white pepper give complexity to these simple, bold ingredients. Richly sauced, the sweet potatoes needed grounding, and earthy kale, quickly fried or baked, adds both texture and grassy greenness to the dish. Best of all, it’s simple and brightly colored, a perfect addition to Thanksgiving tables filled with browns, beiges and whites.

As for tomorrow’s election? We’re a diverse country, currently under great economic duress and social change. The division amongst voters and slow movement of our government reflects a system that is working, awaiting clear(er) direction from a strong(er) majority of voters. Like the growing diversity of my Thanksgiving table, I’ll celebrate the diversity of our country: not just of race or religion, but of the people, geography, industry and education that shapes our beliefs and perspectives.

Whatever you believe, please vote tomorrow. Then we can begin arguing about whether stuffing belongs inside the bird (it clearly does).

*While most cider vinegars are overpoweringly acidic with little depth, Sapore’s Autumn Apple provides balanced bite with fresh apple sweetness. To substitute, use a good sherry vinegar and add 2 cups of fresh apple cider to the braising liquid.

*Kale can also be baked in the over. Toss with olive oil and salt and back ribbons at 400 until crispy. Watch carefully to prevent blackening.