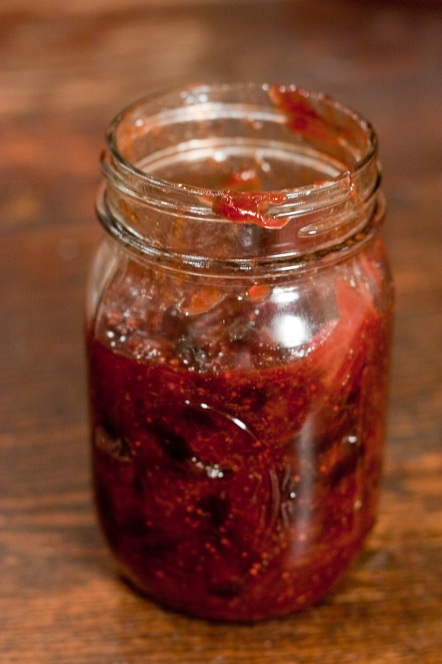 Sometimes, it takes a little extra effort to get a dish right. We’re gonna eventually get to plum chutney here. Stick with me.

This year at Christmas I wrote on the holiday menu, “I’ve been wanting to make a Bûche de Noël for years. Simple in concept, enchanting in execution, this sponge cake, rolled with buttercream and frosted with ganache, is shaped to look like a log, decorated with meringue mushrooms. That said, I have never made one before. It will be part of the grand adventure of this year’s Christmas dinner. Or, it will fail miserably and I’ll put out a plate of Mom’s cookies. Either way you win.”

The buttercream took me two tries. The cake took three. After the second try my Mom suggested that a plate of cookies would be “just as special,” but I was determined.

What does this have to do with plum chutney? In the test kitchen this week we tried four different versions. There was broad disagreement on a winner, ultimately, because there wasn’t one. I woke up Friday morning determined to get it right. My Saturday morning demos at Eastern Market are a passion and while I don’t want to let “perfect” be the enemy of “good,” just good is never good enough.

After reading another fifteen chutney recipes, a new plan emerged. Ginger and cardamom were replaced by cinnamon and star anise. A different vinegar, Roasted Red Pepper Blackberry, offered more depth, spice and acidity than its predecessors. More sugar brought out the fruit that had been dull in previous attempts.

The extra effort paid off at dinnertime. The chutney paired wonderfully with salt-and-fennel crusted, roast pork tenderloin. Or just spread it with cream cheese on a bagel.

My test batch at home included jalapeño but I didn’t see any at the market this week. It tasted great both ways!

*One of my favorites from Sapore, well worth the online order. Can’t wait for it to ship? Try 1/2 white vinegar and 1/2 Sherry vinegar for both high acidity and depth.

Our weeknight dinners are built around turning the bags of farm-fresh produce we carry home each weekend into new recipes for Saturday morning demos at Washington, DC’s Eastern Market. Recently, our friend Sam has joined us for Thursday night’s six-hour marathon sessions where we finalize Saturday’s menu.

Last week, eying a bag of Agora Farms black-red sweet cherries, he said” My Mom used to make a sweet and sour sauce with cherries and peaches. It started with a can each…”

I know. You’ve got a mental image of a loud record scratch accompanying this look of horror on my face. But you’re wrong. No one cooks better than your Mom. No one. At that goes for each and every one of you.

However, since Sam thought it would be fun to go home for a visit sometime and show Mom a new upscale version of her sweet and sour, cherry-peach chicken, we started experimenting. Sweet and sour dishes hang on the balance of sweet, acidic and salty. We began with shallot and fresh cherries, added brown sugar for sweetness and depth, and rosemary for a savory bite. Peach infused vinegar replaced the canned peaches and orange zest add citrusy brightness. The cherries we had were so sweet, and the the peach vinegar mildly acidic, that we added a splash of sharper vinegar to finish the thick, jammy, sweet and sour cherry chutney. Then we served it over wild boar sausages.

I’m still willing to bet that Sam’s Mom’s is better. After all, Mom’s who cook are nigh invincible in the kitchen. But we had a pretty darn-good meal.

Sweet and sour is all about the balance of sugar, salt and vinegar. Taste often as you finish the sauce.

*More wonderful vinegars from Sapore Oil and Vinegar on Capitol Hill. You can substitute with any fruit vinegar, just make sure you get enough acidity. We used about 1/4 cup Peach vinegar and reduced it down slightly as the chutney finished cooking. A splash of the Roasted Red Pepper Blackberry vinegar gave us the extra acidity that we needed. Sherry or cider vinegar would be a good substitute.
Directions: